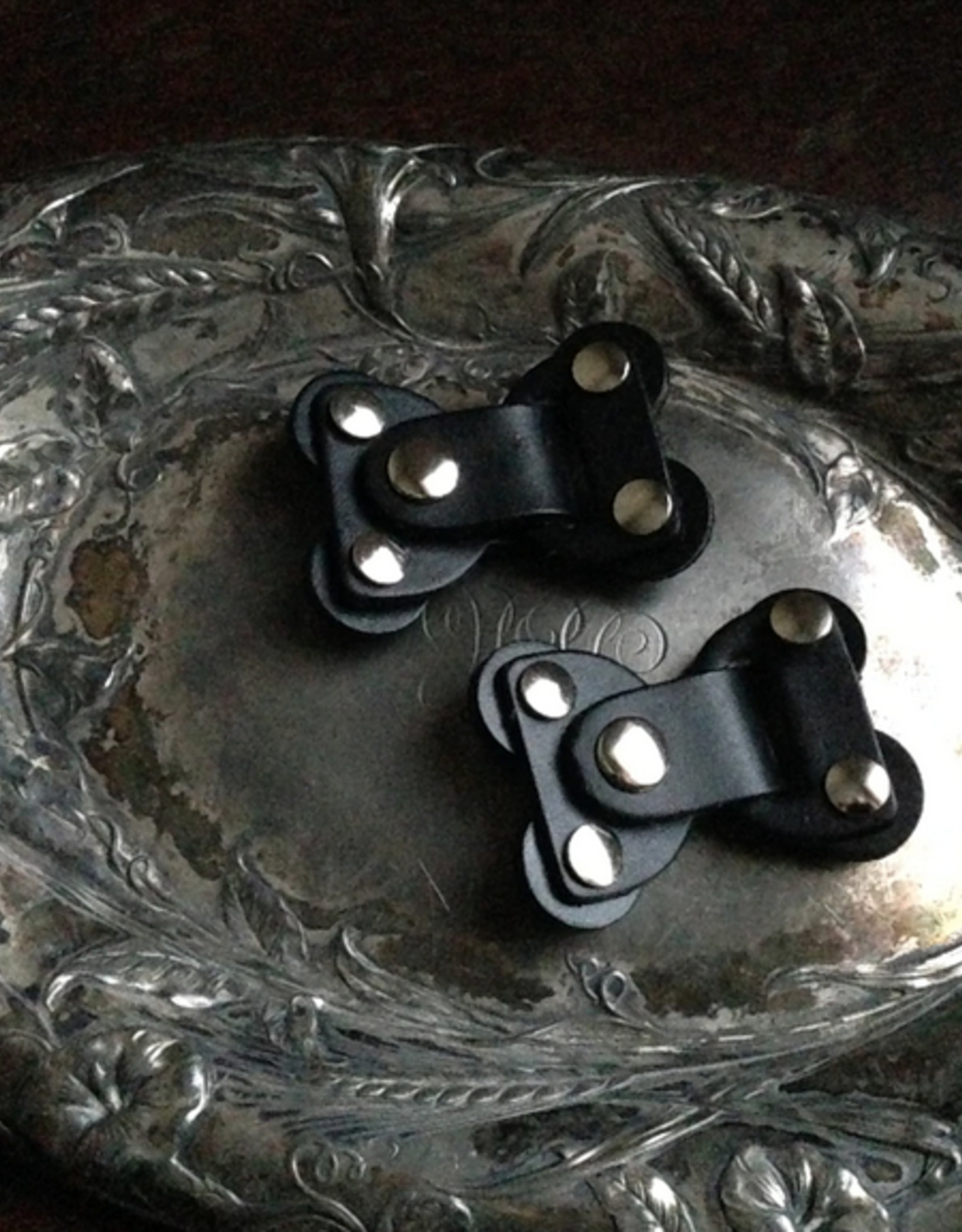 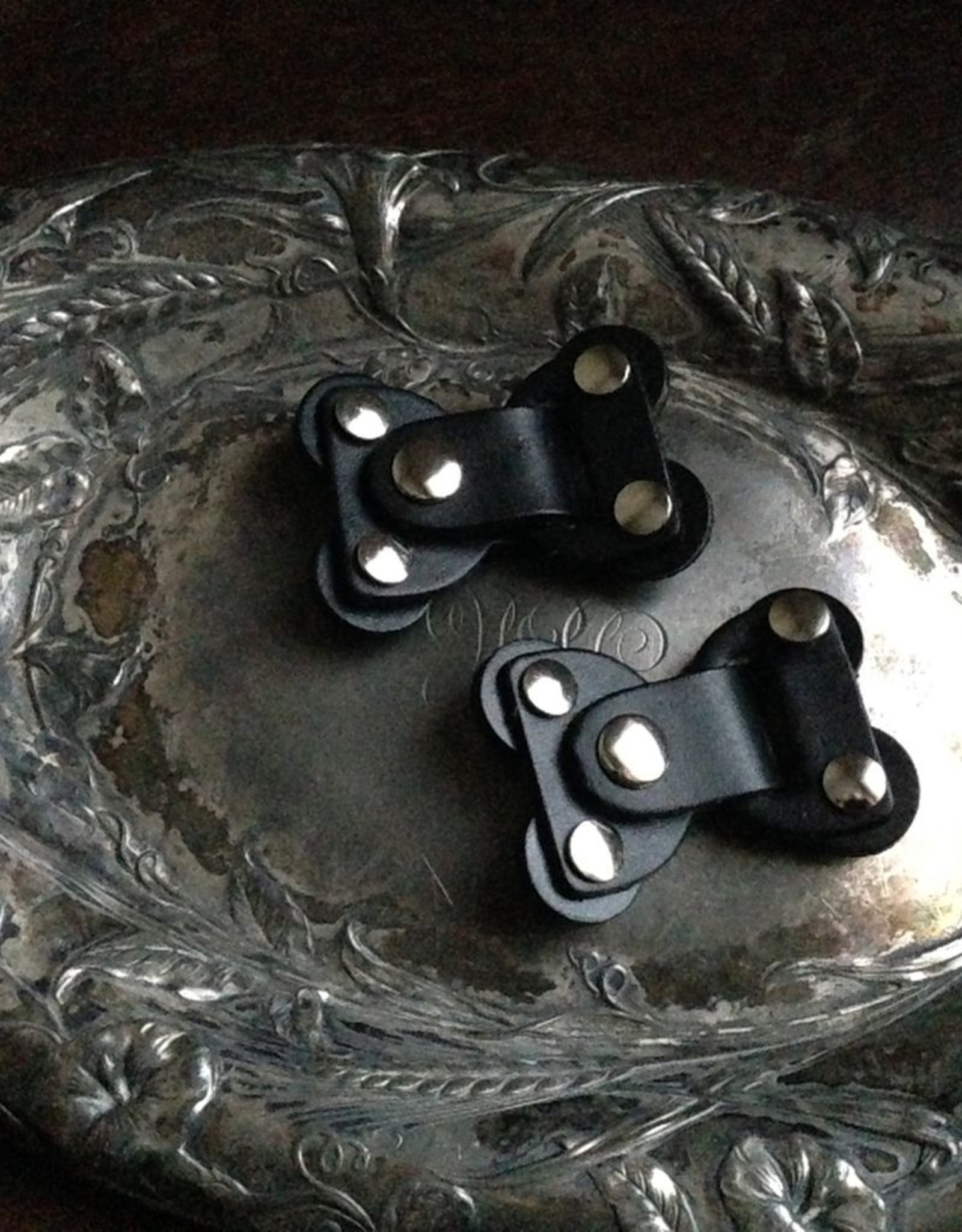 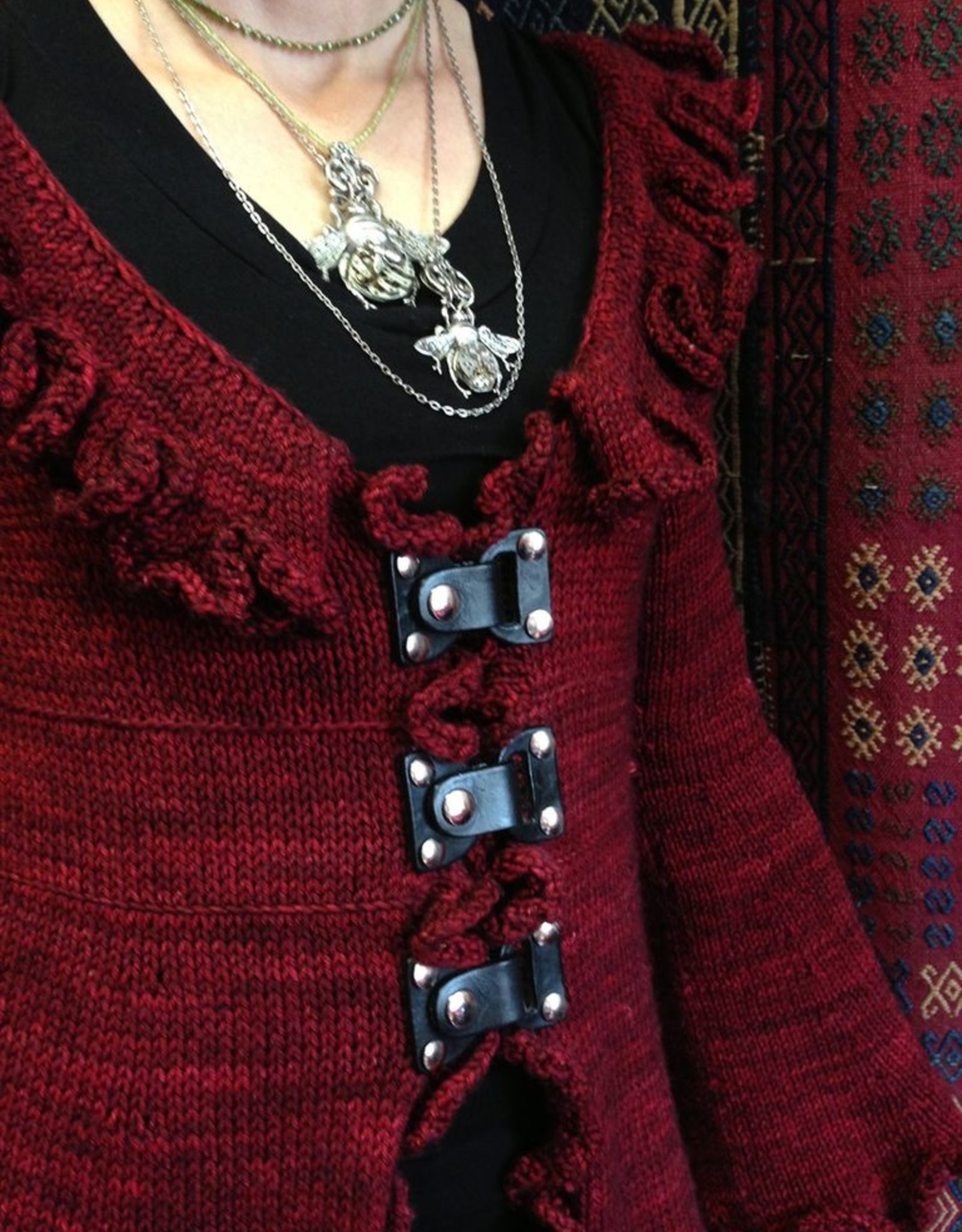 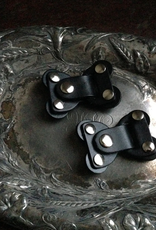 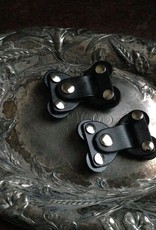 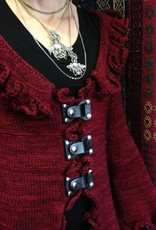 Made in the USA Genuine leather 2.25" wide x 1.75" tall This leather closure screws into knitted, crocheted, handwoven, and sewn garments making it removeable for laundering and a striking alternative to conventional toggles, buttons, and frogs. The leather makes the closure relatively light considering the size of the Lock and its sibling screw-in snap closures. The tongue on one side of the Lock comes up through the slot in the other side, doubles back on itself and 'locks' in place with a snap, making it extremely secure. The Lock is part of a multi-generation design experiment working with screw mechanisms to create light-weight, flexible, easy to put on and take off leather alternatives to conventional sew-on closures. The first generation was the Pedestal Button, which I conceptualized as an alternative to sew-on buttons but also as a kind of basting tool that would old pieces of material together semi-permanently to shape and style garments and to act as closures. The second generation, designed to give users greater flexibility in getting in and out of their garments, was the French Curve and the Floating Buttonhole. Both of these closures use two screw mechanisms, which are meant to fasten onto the two sides of a garment and release one side with a twist of the leather so you can easily get in and out of your jacket or cardigan or cowl. The third generation incorporated snaps for even greater ease of use. The third and fourth generations of closures have all been inspired by architectural hinges and latches. These features having to do with doors and gates are apt inspiration for closures that keep our garments closed and allow us to open them again. Thus, the Venetian Hinge emerged, followed closely by the Florentine Hinge. These two closures attached, as before, with screw mechanisms worked through the fabric, and then opened and closed with snaps. With the release of these two Hinges, it has become so easy to put these wonderfully bold pieces on a garment by just screwing them on. The fourth generation still utilizes screws and snaps, but has begun to expand the aesthetic range of what these closures can look like on a garment. The Latch and the Lock were released at the same time. The Latch comes in a package of two because they are intended to function in multiples, cinching the cuffs of a sweater, creating shaping at the waist, lined up on the front of a cardigan to create a military look, or snugging a cowl around the neck in two directions at the same time -- both up and down -- so no cold can get in. The Lock incorporates a loop and tongue, a new approach that specifically sought to re-invent the ubiquitous Toggle and to offer a removeable alternative. The most recent arrival is the Mod Loop, which takes the loop and tongue solution to another level, pushing it farther in terms of design and styling. The Lock is equally stunning on the flounces of a coat or amidst the cables of a men's cardigan. It's fabulous on accessories.

Add your review
0 stars based on 0 reviews